Dear WomenNC Supporter:
WomenNC will need your help more than ever in the days and weeks to come to protect and improve the lives of women. To move forward in North Carolina, WomenNC empowers local community members, especially millennials, to advocate for city governments to equally benefit women and girls.

With your support, we can help college students like Abby become world changers. Before her year as a Commission on the Status of Women Scholar at WomenNC, Abby was unsure how to be an effective advocate for women. Abby’s year with WomenNC taught her independent research and project management skills, how to engage communities, and how to be a global advocate for NC women. Today, Abby continues to carry the mission of WomenNC. Abby works on Google’s Diversity and Inclusion team where she is increasing access to Computer Science education for girls. As Abby says, “Simply put, WomenNC’s Fellowship made me into a stronger woman.”

Our work doesn’t stop with students like Abby, though. Research shows that, even though women make up 54 percent of North Carolina’s population, women in this state experience widespread discrimination: 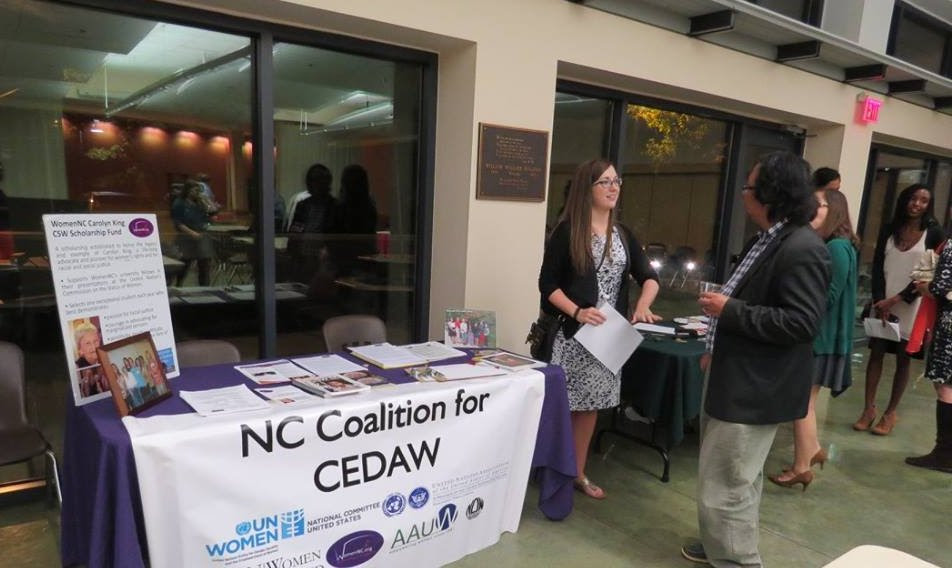 To address this discrimination, WomenNC harnesses the power of volunteers and supporters like you to advance policy changes at the local level through Cities for the Elimination of Discrimination Against Women (CEDAW). Starting with Durham, WomanNC is pushing for NC cities to annually test their programs and budgets to address barriers to full equality for women. Research by Fellows like Abby about the status of women in Durham is the first step to impact these local policy changes. Ultimately, WomenNC is advocating for the Durham City Council to ensure an allocation of at least 50 cents per woman resident toward programs and activities that will improve the socio-economic status of women.

Will you help us improve the lives of North Carolina’s women?
An investment in WomenNC will make a real, tangible difference for women in our state. I hope you will consider donating for the first time, or renewing and increasing your support this year. With your support, we can ensure that North Carolina’s women have the resources they need to thrive where they live and work.With gratitude,
Beth Dehghan
President, WomenNC